Mr. Grossman is a pioneer in the global index and ETF industry, and has helped pave the way for exchange traded funds to forever change how millions of investors around the world construct their portfolios.

Mr. Grossman was previously the Global Chief Executive Officer of Barclays Global Investors/iShares from 2002 until its sale to BlackRock in 2009. From 1985 to 2002, Mr. Grossman held various executive positions with Barclays (BGI) and its predecessor organisations, including Chief Investment Officer from 1992 to 2002. Mr Grossman founded BGI’s Advanced Strategies Group in 1992, where he was responsible for leading the development of the firm’s quantitative, enhanced index, and asset allocation strategies. Following BlackRock’s acquisition of Barclays Global Investors in 2009, he served as vice chairman at BlackRock until early 2011.

Mr. Grossman currently serves as managing partner of ThirdStream Partners LLC., which focuses on private and early-stage investments in financial technology and asset management businesses. Mr. Grossman has also served on the boards of a number of leading financial services companies, including Financial Engines, Axioma and ETF.com.

With assets under management of approximately A$100 billion, the Australian ETF industry is growing at a rapid pace, having expanded by 34% p.a. over the last ten years and 75% over the 12 months to 31 March 2021.

Since its inception approximately 10 years ago, BetaShares has grown to become a leading player in the fast-growing Australian ETF industry. In 2020, BetaShares held the #2 position for share of net inflows in the Australian industry - accounting for 26% of all new money received in the industry. BetaShares’ assets have increased from ~A$10 billion at the start of 2020, to over A$16 billion as at end March 2021.

Commenting on Mr. Grossman’s appointment, BetaShares Chief Executive Officer, Alex Vynokur, said, “We are excited to welcome Blake to the Board of BetaShares. Blake’s extraordinary experience across the industry globally will provide us with invaluable expertise as we enter the next phase of our development.”

“I have admired the outstanding innovation, investor-centric focus, and strong culture at BetaShares for many years, and I’m delighted at the opportunity to join its Board,” said Mr. Grossman. “I’m very excited to help support BetaShares’ next stage of growth, and look forward to helping the firm further extend the breadth of expertly engineered, highly efficient investment solutions for its clients.”

The appointment of Mr Grossman follows BetaShares’ recent announcement that it has received a significant investment from TA Associates, a leading global growth private equity firm, to fuel a major expansion of its business activities. 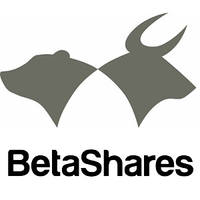