NEW YORK--(BUSINESS WIRE)--Cohen Ziffer Frenchman & McKenna, the boutique insurance recovery law firm that represents Fortune 500 companies as policyholders, which launched just two months ago with four partners and 12 attorneys total, announced today the addition of a new partner and its 21st attorney: Jillian Raines, who served most recently as a corporate insurance attorney at Apple. Like much of the talent that has arrived at the firm since its formation, Raines worked with the firm’s founding partners earlier in her career.

We’re so pleased that Jillian has come home to our firm,” said Robin Cohen, chair of Cohen Ziffer. “She is a great talent, who now brings invaluable insight from her management of insurance assets at one of the world’s largest companies.”

At Apple, Raines advised on the company’s procurement of insurance, its pursuit of claims, and its risk management in endeavors ranging from the launch of retail stores to its globally recognized hardware products to its original content and production business. Her broad portfolio of responsibilities encompassed, among other things, insurance due diligence for M&A transactions and management of insurance regulatory matters including insurance licensing, interaction with regulators, drafting of policies, terms and conditions and other commercial and governance agreements relating to Apple’s customer-facing insurance and service contract products globally.

“I gained so much from my experience at Apple, including a deeper appreciation for what corporate legal departments need from their outside counsel,” said Raines. “I am excited to bring that knowledge back to private practice—and even more excited to rejoin this group I so admire and respect.”

Between her graduation from law school in 2012 and 2018, Raines worked with the founding partners of Cohen Ziffer at two different Am Law 200 firms, and was a key contributor to their insurance recovery group’s success. Before joining Apple, Raines also served as a Legal & Policy Fellow for The Governance Lab at New York University’s Tandon School of Engineering, an advocacy organization headed by Dr. Beth Noveck, New Jersey’s first chief innovation officer, who led President Obama’s Open Government Initiative.

Her arrival is the latest in a string of new hires at Cohen Ziffer. Last month, Andrew Bourne, who has secured hundreds of millions of dollars in insurance coverage and earned multiple groundbreaking decisions, joined Cohen Ziffer as the firm’s first lateral partner. In addition to Bourne, Nicholas Maxwell joined the firm as counsel, along with six new associates. 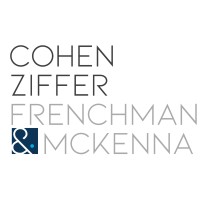