Physician-owned pathology practice ProPath has welcomed Julia A. Bridge as the new director of its fluorescence in situ hybridization (FISH) and cytogenetics team. As part of her role, Dr. Bridge will also utilize her testing expertise in bone/soft tissue tumors for ProPath’s molecular pathology division.

“We are thrilled to have Dr. Bridge join our team,” said ProPath President, Chairman and CEO Cory A. Roberts. “She has a rare combination of expertise in both anatomic pathology and cytogenetics that make her an expert with an international consultative practice. Her ability to interpret microscopic morphology in concert with her unsurpassed knowledge of the molecular and genetic signature of tumors is unsurpassed and will carry ProPath’s abilities in these areas to the forefront of all practices.”

Dr. Bridge is the current President of the United States and Canadian Academy of Pathology. She has extensive experience serving on editorial boards for pathology, orthopedic, and genetics journals, as well as consulting and advising boards such as the Children’s Oncology Group Soft Tissue Sarcoma and Ewing sarcoma committees, the College of American Pathology Glioma Expert Panel, and as a Secretarial Appointee to the national Department of Veterans Affairs Genomic Medicine Program Advisory Committee.

She has contributed to more than 300 scientific articles, chapters, review papers, and digital and online resources, as well as several books. 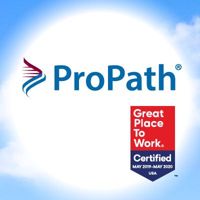