Board Secretary at University of Northwestern-St Paul

Dr. Sara Robertson '54 is retired as vice president of development for Pioneer Clubs, Wheaton, Illinois. A graduate of University of Northwestern (Class of '54), Robertson received an M.A. from Northwestern University and Ed.D. from Northern Illinois University. She is an ordained elder in the First Presbyterian Church, of Glen Ellyn, Illinois, where she sings in the choir. Robertson serves on the board of Christians for Biblical Equality. She is also a Trustee of the Association of Cedarbrook Camps. In addition she serves on the Board of the Blue Lake Association. In addition to writing numerous magazine and journal articles, Robertson is a published author of Helping the Hurting, published by the Christian Stewardship Association. She also contributed a chapter, "Funding the Dream," to Serving Those in Need, edited by Edward L. Queen II and published by Jossey-Bass in 2000. Other contributions are in the Dictionary of Christian Education, published by Baker Books. Robertson's hobbies are swimming, sailing, reading, bicycling, traveling and camping. Robertson has served on the University of Northwestern Board of Trustees since 1990. 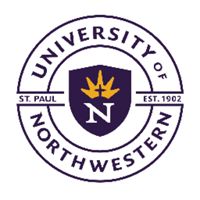